Ashleigh’s always had two passions: abstract painting and caring for people. But it wasn’t until she connected with Wesley Mission that she uncovered how she could use both her passions to pave out her career path. 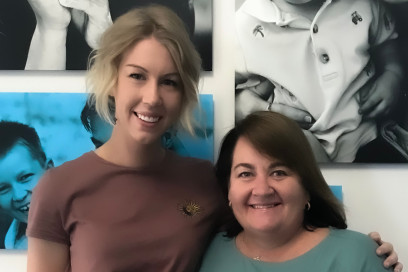 A single mum to a five-year-old son, Iggy, over 12 months ago, Ashleigh was at a crossroad, unsure of what career path to take.

“I’ve always had the desire to do something in the art industry, but also at the same time I’ve also had this desire to help people. But I lacked the confidence to see that I had the ability to succeed,” Ashleigh says.

Having previously worked as pharmacy assistant, at the time, all Ashleigh knew was that she wanted a career change. After spending the last five years caring for her son full time with the occasional work, Ashleigh was ready for a change. While determined, Ashleigh felt uncertain. But when Ashleigh met Wesley ParentsNext Consultant, Trish, things suddenly became clearer.

“On meeting Trish, I knew straight away that she understood my situation. She was really understanding and took everything into consideration,” Ashleigh says.

“She was able to help me rationalise my thoughts and give me great perspective.”

Everything then fell into place. Ashleigh began studying a CHC32015 Certificate III in Community Services through Wesley Vocational Institute (RTO code 90091) and was given the resources she needed, thanks to the support of Trish, Wesley Mission and brokerage funds from the Australian Government’s Department of Education, Skills and Employment.

“The course fees were covered, and a laptop was provided, which took the stress out of everything, allowing me to go into my studies with a clear mind,” Ashleigh explains.

The flexible studying options meant Ashleigh could juggle her studies while caring for her son. And during the challenging season of COVID-19, Ashleigh persevered with the support of Trish.

“It was pretty difficult at times, but to be able to complete it and show myself that I can do it, was one of the highlights of doing the course,” Ashleigh says.

“And Trish continues to support me and has been there for me at the drop of a hat to help sort paper work for my new employment and continues to encourage me to keep moving forward.”

As part of her course, Ashleigh was required to complete a work placement. Once again, Ashleigh found the support she needed on her doorstop. Jackie, Program Support Officer, Wesley Dalmar, recommended an opportunity across the road from Wesley ParentsNext’s office in Ballina, at Choice, Passion, Life (CPL), which supports people with disability.

“If it hadn’t been for Jackie mentioning that, I wouldn’t have even thought to go there. I’m really thankful that she guided me that way and saw my potential in working there,” Ashleigh says.

“Wesley ParentsNext really took me on a journey of self-discovery. It introduced me to people who I wouldn’t have met before who have been instrumental in my journey,” Ashleigh shares.

Doors continued to open for Ashleigh. The work placement quickly turned into a secure job, so Ashleigh can support her son who is about to start school.

Supporting all of Ashleigh’s needs has been Trish’s priority since meeting Ashleigh. Trish organised new shoes for Ashleigh for her new job and even registered Ashleigh’s car.

“The support that I’ve gotten from Wesley Mission outside of the education has been amazing,” Ashleigh says.

The course through Wesley Vocational Institute has now opened another door for Ashleigh to follow her dream. Throughout her studies, Ashleigh began to dream of using her artistic abilities to support people with disability.

Ashleigh shared her dream with Trish, who then organised for Ashleigh to study an Art Therapy Diploma. Now she’s putting her skills into practice. Ashleigh has begun to integrate art therapy into her work at CPL with supporting people with disability and living in aged care. At CPL, Ashleigh is helping people reach their potential both artistically and therapeutically.

“I have a client that has Alzheimer’s that I often paint with when I’m on shift with her,” Ashleigh explains. “It definitely calms her down. Particularly with Alzheimer’s, at times she’s quite anxious. She’s able to come back into her own little reality by letting it out on a canvas, instead of being too overwhelmed with what’s going on around her.”

Ashleigh’s dream goes beyond using art therapy to care for people in need. She hopes to one day showcase the artwork of the people she supports.

“I would love to be able to hold art exhibitions. I want to have a workshop during the year, whether that be in the workspace environment and have a gallery there as well, or it can be mobile. I could go to people’s houses and do art with them there and then get a collection together and hold exhibitions each year,” Ashleigh explains.

Since meeting Ashleigh, Trish has watched her grow from strength to strength and believes Wesley ParentsNext came along at the right time to support Ashleigh on her upward path.

“She’s much more confident. She’s just blossomed,” Trish says. “She’s got a really good sense of direction as to where she’d like to move forward. She’s one of those really great stories that show the success of the program.”

As Ashleigh keeps working towards her career goals, she’s thankful for the support from Wesley Mission, which has gone above and beyond her expectations.

“I can say without Trish, Wesley Mission and Jackie, I wouldn’t have the confidence I do now to see myself carving out a career and becoming successful.

“Wesley ParentsNext ultimately helped me to find a passion, not just a job. I am forever grateful for this program and what it brings to parents trying to get back on their feet.”