Find out how a desire to make difference gave birth to the Lottie Stewart Hospital and how the site continues to serve our community today. 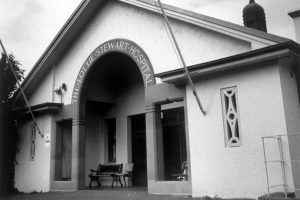 After Sir Frederick Stewart lost his wife in the 1940s, he wanted to honour her memory. In a compassionate and generous move, he bequeathed his family home in Dundas, along with its farm buildings, implements and 18 acres of adjoining land, for us to open a hospital. It was called Lottie Stewart Hospital, bearing the name of Sir Frederick’s late, beloved wife.

In time we added a residential aged care facility, Wesley Tebbutt Lodge, to the site, extending the community and providing a place for older people to live comfortably with a high level of care, without being admitted as patients of the hospital.