No more training wheels – Tim rides towards his future

“Schooling’s not a happy place for me, ever,” Tim sadly reflects. For as long as Tim can remember, he’s struggled to read and write.

“They put me through all sorts of tests when I was at school, for ADHD to not being able to look at the page and tell that there were letters. It just looked like squiggly lines to me.” 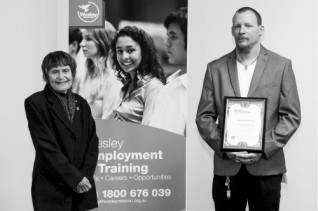 Diagnosed with meningitis when he was young, Tim’s learning abilities were affected. And sadly, Tim’s finite literacy and numerical skills has limited his ability to find stable work.

Now a single dad at 40, the prospect of studying again was initially daunting. Over the years Tim has studied numeracy and literacy courses but faced encountered non-supportive teachers.

When Tim was referred to Wesley Mission, he assumed this course would result in little progress.

“I didn’t want to be there. Just looking at the paperwork, put knots in my stomach,” Tim says.

But as Tim began studying his Certificate III in Business Administration (BSB30415) he quickly realised the people were different.

“With Jill, I tell everybody, she’s the world’s best teacher. She really is. She put just as much effort into teaching me as I did to learn. I can’t thank her enough for it.”

Thanks to Jill’s guidance, Tim says he’s been given the support he needs to balance his studies and parenting duties.

“Every time a barrier comes up, Jill always finds a way to make it happen – to be a single parent and have to have time off for school holidays.

Now finished his first course, Tim’s studying a Certificate IV in New Small Business (BSB42015) at Wesley Vocational Institute to pursue his ambition to open his own bike safety business for kids.

In early 2020, Tim was awarded the Dot Hennessey Award, recognising an exceptional Vocational and Education Training (VET) student. Named after Dot Hennessey, the award honours the 50-year contribution Dot has made to the Illawarra VET sector.

Tim is now on his way towards a career he’s passionate about. And he says, it’s all thanks to Wesley Mission.

“I’m a better person for coming into Wesley Mission…They’re all telling me to stand up and be counted. It’s changed my life.