Standing in front of ANZ Stadium at Sydney Olympic Park, Christie Mokotupu effortlessly throws a volleyball in the air. She’s transported back to almost 20 years ago when she competed with Australia’s beach volleyball team in front of a crowd of 10,000 people.

“Every time I come here I get these emotions running through my body that I’ll never forget. I was very lucky and blessed,” she reflects.

At just 17, Christie had the world at her feet. As a young girl, she’d always dreamed of playing in the Olympic Games.

In 2000, Christie donned her gold and green uniform and represented Australia in the Sydney Olympic Games. She had a promising future ahead as a professional athlete.

“Competing in the Olympics, I knew it was a huge honour to represent your country. It’s such a rare thing for people to do, especially at 17 years old.’ 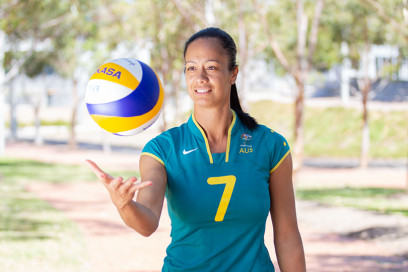 “I didn’t have time to breathe. I was just exhausted and I lost vision. And at the time, no-one convinced me to stay in it. At 20, I let it go. I wanted to know what it was to live a normal life and be a normal teenager.”

While a world of choices opened for Christie, not every choice she made was the right one. One reckless decision, taking an ecstasy pill, led Christie down a dark path to alcohol and recreational drugs.

“I went through this slow, vicious cycle and I tell people it doesn’t happen overnight. It’s a slow thing. It’s one tiny little decision and you end up one day in a weird place.

“Then all of a sudden you’re looking back with regret and you’re at a place of depression.”

Like many before her, Christie remained silent about her drug addiction. But ten years on, she shocked the nation when she shared her story publicly for the first time.

Christie’s breaking point came in her own reflection of her role as a mother.

“I realised that I was not a good mum. I was letting my son down. I wasn’t a good example to him, drinking, taking drugs. All these things I was doing behind the scenes, which I thought no one could see. But I think our kids can see all, so it was a lie that I wasn’t hurting anyone.”

Little did Christie know, God had other plans for her life. In that season, where Christie felt she’d lost everything, she found Jesus.

Standing in the middle of Sydney Olympic Park, she suddenly shouts the name “Jesus”. It’s a declaration of thanks and gratitude for her Saviour— Jesus Christ. For Christie, her faith was the catalyst for healing.

“I was really against the whole church thing but at rock bottom in depression, my sister invited me. The timing was right. As I drew close to God, one by one, things fell away. Alcohol fell away, smoking and drugs—all these things I’d picked up in my 20s. The healing came as I started reading the Word of God. He began directing me to places of recovery and counselling.”

Sharing her story with the world opened up her life, her son’s life and family members, to criticism and scrutiny.

“That was very hard to walk through. The shame, the condemnation. But that was my journey to go through because after it, God healed the shame and the condemnation. It was incredibly liberating. That is why I want to help other people,” says Christie.

“Through every decision I made throughout my 20s, my family never judged me. As a family we walked through the hardest part. My sisters, my siblings, my brother, my parents, we’re very close knit. We’ve overcome that together. Thank God that they supported me through it.

“Sharing my story, I knew it was going to affect my son. Protecting my son is the most important thing. But I know he looks up to me and he says, ‘I love you’. He looks at me like I’m his hero. We have a beautiful partnership, my son and I.”

Two years after sharing her story with the world, Christie was invited to be interviewed by the Superintendent on Wesley Impact! TV, which airs every Sunday on Channel Nine.

“I thank God for that opportunity. Because at the time, when people Googled my name, all they saw was my story, my decline into drugs. And it was hard for me. So I’m so thankful for Wesley Impact! TV for giving me the opportunity to share my overcoming story, more than my pain story.”

No longer weighed down by her past, Christie continues to share her story with anyone who will listen.

“I don’t live there anymore. I feel so great that I’m liberated now to talk about drugs. I don’t carry any shame and I want to help other people overcome shame for good.”

Since becoming a Christian and finding freedom from her addictions, Christie has supported people through motivational speaking, at One80TC, a residential rehabilitation centre, and Candifest, a ministry Christie founded to help people overcome their addictions and find hope for the future.

“I asked God to use me in the best way he thinks I can be used. I have a story to tell. I like public speaking and I don’t think God gave me these gifts and talents to hide them.

“I don’t have all the research, but I tell people I’ve got the life experience. I think that really helps them to connect with me.”

“Supporting people with drug addiction without Jesus, it’s impossible for me. The only way I can do this is with Jesus.” But at the core of her message and ministry is Jesus. 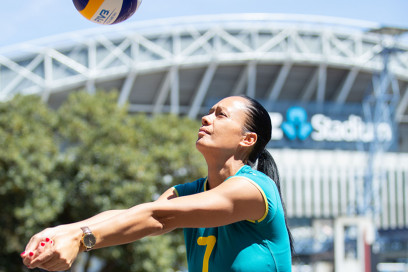 Christie partners with charities she wholeheartedly believes in. And that’s what drew her towards Wesley Mission. In September, when Christie was walking through Sydney’s streets she suddenly recognised Wesley Mission’s iconic cyan-coloured shirts, worn by our street fundraising team. Passionate about our work with homelessness and mental health, Christie signed up on the spot to become a regular monthly donor.

“I love that Wesley Mission has been around for more 200 years. It’s an iconic Australian charity. It’s trusted by the community, so I would encourage people to support it. Give what’s in your capacity and help people less fortunate than yourself.”

If you would like to become a regular donor, visit https://www.wesleymission.org.au/get-involved/donate/ways-to-donate/regular-giving/ to discover more.