At the centre of Mike’s world are his three boys. “They’re my boys. I love them to bits. They’re my family,” Mike says.

For over 20 years, Mike, who’s now 60, has devoted his life to caring for foster children. Unable to have children with his now ex-wife, Mike was in his late 30s when he first became a foster carer.

Thrown into the deep end, at one-point Mike ended up with eight children in his care. “We had six in nappies at one stage,” Mike reflects.

But it was in that moment, Mike found his life calling. “Changing nappies at two in the morning, that’s what inspired me to quit my full-time job and become a full-time carer.” 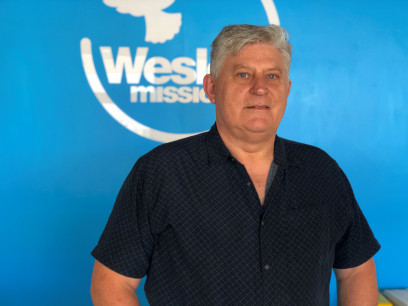 And it’s a decision Mike has never regretted. “Children need time. That’s why my career went.”

Mike’s now 20-year-old son came into Mike’s life when he was just one. And shortly after, his twin half-brothers, now 16, joined Mike’s family when they were only two weeks old. While all three boys have faced many struggles throughout their lives, Mike has always been their rock.

“I’m their dad, and I’ll be there for as long as they need me to be,” Mike says proudly.

“Parenting is the most challenging jobs you’ll ever do in your life but it’s the small things that have made it wonderful. There’s been lots of busy days, dealing with school but lots of fishing trips, camping trips and smiles when they come home from school with awards.”

“Kim’s a very caring person and he’s been very supportive of me and for the boys. And when we went through some hard times, I’ve survived because Kim’s been my go-to guy. He’s been my rock,” Mike shares.

“With Kim, we’ve had seven years of consistent contact and understanding. That makes for better outcomes for children.”

Kim adds, “Mike is an absolutely tremendous carer and has this huge heart for these boys. They’re an integral part of his family.”