On Sunday, 27 October, Wesley Mission in Sydney gathered as staff, supporters and congregation members for their 2019 Annual Meeting. The meeting was the opportunity to launch Wesley Mission’s 2019 Annual Report and, under the theme ‘Strengthening our future’, to celebrate the good work which this year supported more than 200,000 people.

Wesley Mission is one of Australia’s oldest community service organisations and the large crowd who attended gave thanks to God for the continued growth that this unique Word and deed mission had achieved, reporting 11% revenue growth to increase the number of programs and locations providing vital support to those most in need. 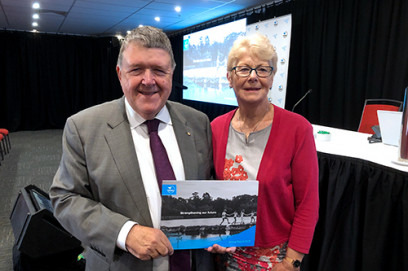 CEO and Superintendent of Wesley Mission, the Rev Keith V Garner AM, gave his fourteenth executive report to the meeting and has announced that he will retire from this role in February 2021.

“It is hard to believe that it will be 15 years in 2021 since I took on this role. My wife Carol and I intend to travel widely immediately following our leaving Wesley Mission, and for a year we will be away from Sydney to give the new person time and space to establish their own leadership of this great mission which is unique in both its reach in Australia and across the world. Following this we will be making our home in Sydney and will seek to discern what God has in store for us by way of Christian service in our next season of ministry,” said Mr Garner.

Mr Garner holds both the senior executive role and Superintendent of the huge diverse, multicultural Christian ministry. The Annual Meeting recognised the growth of Wesley Mission’s congregations, including the integration of an Indonesian-speaking congregation of more than 500 regular worshippers.

Dr Keith Suter AM, the Chair of the Mission Council said, “Since Keith arrived in Australia, he has exercised a remarkable ministry that has helped to grow Wesley Mission’s Christian presence both in the city of Sydney and far beyond. The way in which he has managed to hold together the work in the community in addition to maintaining a strong, prophetic voice has been outstanding. His media presence in particular has been greatly valued. We’re grateful that Keith has given Wesley Mission the time to be able now to search for and appoint a successor.”

Wesley Mission has always had a strong emphasis on sharing the gospel and providing practical support to the community. This demanding role has been held by a succession of distinguished leaders and in its most recent chapter, under the leadership of Mr Garner, Wesley Mission’s community services has become an incorporated body but rejoices in the fact that, as a mission, it maintains the dual focus of Word and deed.

The Wesley Mission Board is being assisted by Korn Ferry in their search for a new leader. Board Chair, Michael Anderson, thanked Mr Garner for his exceptional leadership of an expanding community services portfolio which this last year has seen growth in areas of great need, including mental health and suicide prevention, services to strengthen families and their children and support for people with disability.

The meeting also announced significant projects to help those experiencing homelessness and the pressures of housing affordability, which will be delivered in Mr Garner’s final year as part of Wesley Mission’s five-year strategic plan which also draws to a close in 2021. Former Australian Prime Minister, the Hon. John Howard OM AC, has announced his patronage of a campaign to raise close to $25 million to complete the essential building projects. 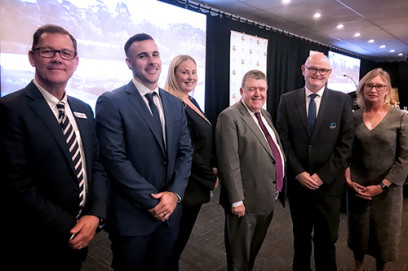