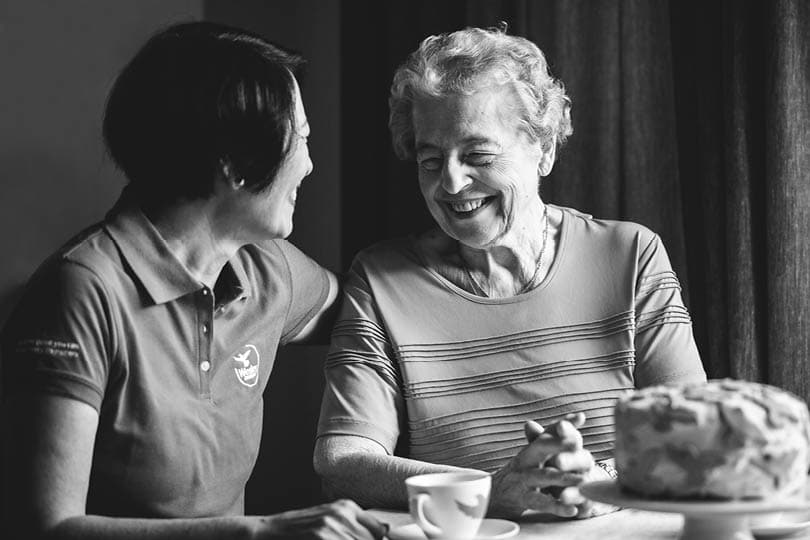 In 1965, Kathleen’s family migrated to Australia from England, and just a year later, at 35, Kathleen began volunteering at Wesley Mission’s Lottie Stewart Hospital. Her calling would see her volunteer at the hospital for more than 34 years, including time as the president of the Lottie Stewart Auxiliary, and receiving an OAM.

Always humble, Kathleen says her service is an expression of her faith in Jesus Christ.

“I call it a caring ministry, because I like to go and talk to people and help them if I can,” she said.

Kathleen’s ‘caring ministry’ has always been a family affair. Her husband Peter served on the Board of Lottie Stewart Hospital and Chairman of the Board for five years, and their daughter Pamela grew up helping Kathleen sell lollies and refreshments at the hospital kiosk, and is now employed as a member of staff with Wesley Mission.

When Peter retired in 1997, he and Kathleen moved into a self-care unit at Warnervale on the Central Coast. They were there for 13 years until Peter started developing dementia. Kathleen knew that they would need to find somewhere that could cater for higher care needs, so they moved to Wesley Mission’s independent living village, Alan Walker Village in Carlingford, New South Wales.

Since moving into Alan Walker Village, Kathleen has continued to follow her passion for volunteering and serving others while ensuring she is there to care for Peter. She was on the Resident Committee for three years and, until early in 2016, Kathleen was president of the Social Committee.

They both continue to volunteer, with Kathleen playing the piano for the Monday service each week and Peter socialising and providing company to the residents.