The first time Sam walked into a prison, all eyes were on him. He was the outsider. And it was intimidating.

He’s been heckled, screamed at and he admits to feeling nervous.

“The first few times there were a few scary moments. But I think in those moments God gives you the grace to be there,” says Sam.

“Sometimes you’ll be in uncomfortable situations, but you just keep moving. You push forward, move forward and point forward. Because if you just stop there, then you’ll fall apart.”

Sam now stands tall. His confidence comes from his deep-rooted faith. He has a new perspective he says. He has God’s perspective.

“I see people. People who have been in really hard circumstances,” he pauses.

“We’re not just concerned about your finances, but we think holistically about how we can help you – and I think that’s what Wesley Mission is all about.” 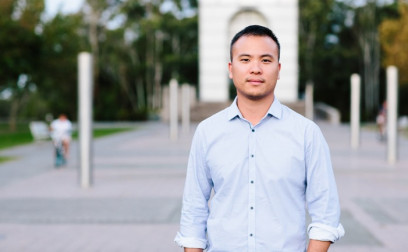 Since February 2019, 735 inmates have attended Wesley Mission’s ‘In Charge of My Money’ – a program which has supported vulnerable Australians manage their money and avoid debt since 2011. HIPU aims to reduce and break the cycle of re-offending in New South Wales.

“When I speak to inmates during the [course] breaks, you realise that a lot of offending that occurs, there’s an element of finances and money,” explains Sam.

So when the prospect arose for Wesley Mission to be part of HIPU, Sam jumped at the opportunity.

“I’ve always had a passion for working within corrections. Although my job is to find partnerships, sometimes you find partnerships you feel passionate about that are compatible with Wesley Mission and with what the community wants.”

For Sam, it’s about empowering inmates to take charge and ownership of their future decisions.

And they’re seeing attitudes shift from despair to hope.

“We had one inmate come up to us and thank us for helping another inmate,” says Sam. “He said, ‘He’s never said a word while he’s been in here. So you’ve cracked him open’.”

And it’s not just influencing the prison inmates.

“Not only are they taking that knowledge themselves, but they’re passing it to family – people who are significant to them,” explains Sam.

For Sam, HIPU has opened the door to not only share important life skills but has kindled his passion to explore prison chaplaincy.