David's story: The gift of listening 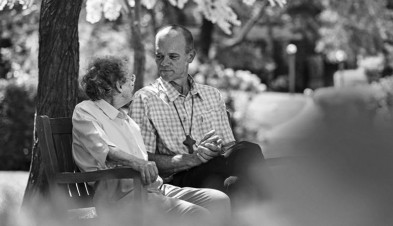 The moment the Rev David Van Akker stepped into Sylvia’s yard, he became the gardener. As he pruned the rose bushes, he chatted to Sylvia. He even reminded her to take her medication. The reverend-cum-gardener, then offered to cook her dinner and she accepted.

Sylvia had dementia, and because of her condition always thought David was someone else. As a Wesley Mission Chaplain, David often gets to know people with dementia and, when required, plays roles assigned to him, be it a gardener, a grandson or a long lost friend.

“That’s the doorway they offer you,” he said. “If you try to rationalise with them, they become hostile and won’t be open to you … My role is to provide opportunities for people to talk and tell their story and to help them reflect on it if they are ready.”

For David, the role of listener is a natural one and carries through his life. It’s a way of showing people they are valued for who they are.

“I have the chance to come in and give people an opportunity just to talk and work through the changes in their lives … Ultimately, it’s about respecting people and honouring them.”

David is inspired by Jesus’ amazing sense of compassion and care for all in the community, irrespective of who they were.

According to David, “It’s important for me to demonstrate this as it sends a message to everyone else. If I was to disregard someone with dementia, it would send a message to everybody that people are only of value if they are lucid or intelligent.”

David Van Akker is now Chaplain of Wesley Mission’s new ‘ageing in place’ residence, Wesley Rayward Carlingford, officially opened on 1 March, 2013. This award winning home has 74 rooms including a 14 room dementia unit. A 1954 Hillman Minx is one of several familiar objects in the courtyard including a potting shed, bus stop, letterbox and rotary clothes line to help calm residents and increase their sense of wellbeing.