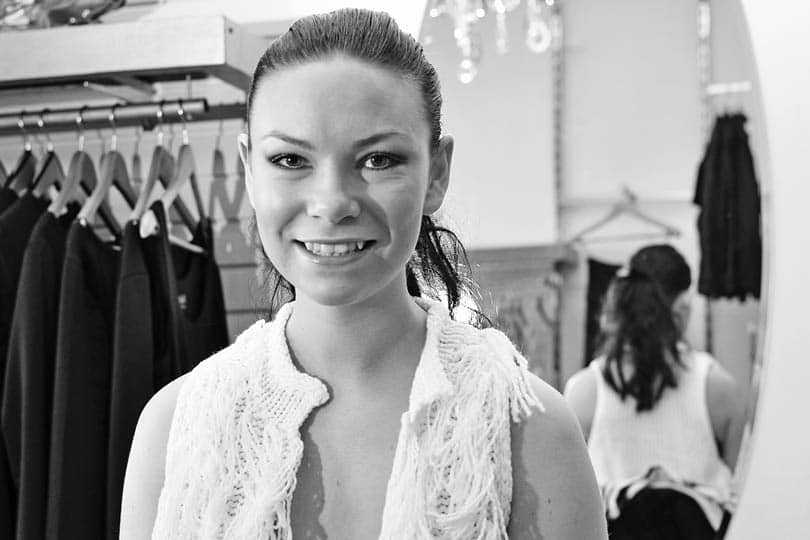 Today, Jamie-lee is following her dream of working in the exciting world of fashion, but it has been a challenging journey.

As young children, Jamie-lee and her five siblings were placed with foster families because they were being exposed to domestic violence and their parents’ heavy drug use. Not surprisingly, Jamie-lee found it hard to apply herself at school and in Year 9 she was referred to Wesley Foster Care Services’ education mentoring program, which helps children in out of home care work through social and educational difficulties at school.

Jamie-lee is happy to be working in the fashion industry.

Once a week, Jamie-lee met with her mentor, Victoria, who helped her create better work habits, learn how to organise herself effectively and develop independent learning skills. As the relationship grew, Jamie-lee opened up to Victoria about her traumatic childhood and her insecurities about being Indigenous.

Gradually Jamie-lee’s marks improved and she became more interested in school. She went from poor results in early high school to being in the top 10 of her Year 11 English class. She gained confidence and was eager to “get into the real world”, so in Year 12, she became a hairdresser. But, during her final years at school, her foster parents separated and when her foster mother moved to Queensland it hit Jamie-lee hard.

After she left school, she started taking drugs and became involved in negative relationships, but her time with Victoria continued to pay off.

“Victoria built confidence in me and I couldn’t have pulled myself out of the crisis without that,” she said.

She eventually left the drugs behind.

“I was such an angry person but I reached a stage where I didn’t want to be like that anymore,” she said.

Today, Jamie-lee is proud of her Aboriginal heritage and has become a mentor to her younger siblings. To any young people struggling, she said, “Where you’ve come from doesn’t mean you have to stay there. You can go out and get what you want in life”.