Private Ronald Herbert King a volunteer infantryman with the 7th Battalion, now with service medals proudly displayed returned from duty in Vietnam in 1968. It was the height of the Tet Offensive. North Vietnamese Army and Viet Cong soldiers stalked the jungle outside Nui Dat. The night patrols revisit Ron like a naphtha flash. “I saw enough action to do me. Enough to turn you off war,” he says sitting in his Housing NSW apartment at Granville in Sydney’s west. This is now Ron’s permanent residence. He has a place to call home. 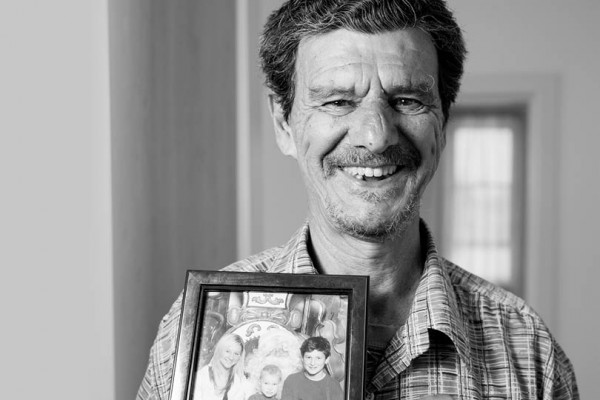 “I now feel more in control of things,” he says reflecting on his new home which Roma Price, Manager of Wesley Mission’s Assistance with Care and Housing for the Aged (ACHA), helped him secure through the Housing NSW. Ron is one of the hundreds of homeless elderly people Roma and her small team work alongside, securing accommodation and advocating on their behalf each year.

Prior to his new home in Granville, Ron lived in a rundown boarding house in Sydney’s inner-west. “I now have everything close by—toilet, cooking facilities and more room to move around,” he says with the thankfulness of someone who has stumbled upon a new reality. Photos of his children and grandchildren are humbly shown. His thoughts are with them and the hope of a family gathering at Christmas. “I just want to sit down and talk with them,” he says.

It hasn’t always been that way. Listening to Ron you can almost find an analogy between the battles fought at Bien Hoa and Phoc Tuy and the ensuing years when he battled depression, war-related Post Traumatic Stress Disorder, subsequent alcohol abuse and the fallout of two failed marriages. Ron’s journey has taken him to numerous abodes but nothing he ever could call home: a place with a sense of warmth, permanency or basic comfort. Personal struggles have taken precedence over such practical endeavours.

In 1969 he was married and he and his wife lived in a one bedroom unit in Glebe. In 1971 his first child was born and they moved to a two-bedroom place in Annandale. He was working at Luv pet foods and the family had regular income. By 1977 he was hospitalised for the first time. By 1980 his marriage was over. “I was in hospital for 10 weeks at a time,” he says. In 1981 he was admitted to Concord Hospital and in 1984 his divorce was complete.

After the divorce, Ron was on the road. For five years he worked as a postman before he was assessed as Totally and Permanently Incapacitated (TPI) by the Department of Veterans’ Affairs and placed on a pension. His long march began but he never considered himself homeless. “I didn’t stay in the one spot too long,” he says. “I moved around a lot. I lived at Port Kembla in ‘84 in a one bedroom flat. I lived at Taree in the ‘80s, my sister’s house. I lived there for a while.

“I’ve lived in motels, living with people. I lived in a motel up at Taree for about two years. I had boarded out with my family in the 90s. “I was boarding out at Mount Druitt, at my daughter’s place. She was living at Mount Druitt before she went to Canberra.”

A second marriage lasted just one month. “I’m 68 and don’t have anyone real close,” he says. “But there’s always someone worse off than me.” Ron becomes animated and energetic when he remembers the joy of Christmas as a child: “Christmas dinner, the pudding and the threepence in the pudding … and grandfather bringing in presents. Christmas tree: father had a real tree. He put all the presents in there and then I got a pushbike when I was 10. I got like cowboy suits and all that sort of thing.”

With life a lot more stable, Ron hopes to share Christmas with his three children, five grandchildren and one great grandson. He wants to draw upon the good memories of the past and looks forward to a brighter future. “I want to get them all together,” he says. “Sit down and talk with them. Buy them presents like the old days.”

Now with the help of Wesley Mission that hope may become a reality: he is safe and secure, and cared for by Roma Price and her team at Wesley Mission’s Assistance with Care and Housing for the Aged who make those they support feel precious and worthy. Private Ron King is now marching home to a different drum.